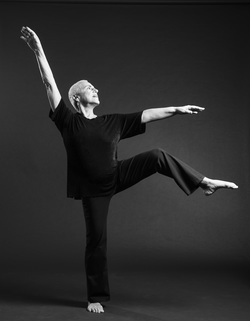 Upon leaving the professional dance world in NYC and joining the faculty at The
University of Michigan, I found that I very much enjoyed teaching and choreographing.
I use the choreographic process as a learning tool, sharing the steps that I go
through to create a piece. During the process, I work on performance skills and help
dancers reach their highest potential as performing artists.

Having had the good fortune to work under and be mentored by some of the Modern
Dance greats, in particular, Martha Graham, José Limón, Doris Humphrey, Louis
Horst, Anna Sokolow, and Betty Jones, I feel compelled to hand on their great legacy.
During my long career in college teaching and administering college programs,
I have continued to choreograph and perform.

Now that I have retired from college teaching, I continue to be active as a teacher and
choreographer by doing short residencies, teaching and choreographing. I teach the
Martha Graham and José Limón techniques and restage existing pieces of my own
choreography or create a new work on the dancers.

BIO
​Liz Bergmann
Bergmann retired after eleven years as the Dance Director at Harvard University.  Bergmann has had many years as a distinguished choreographer, teacher, performer, writer and administrator. A graduate of The Juilliard School in New York City, Bergmann was a member of the Merry-Go-Rounders Dance Company in New York City and taught there for José Limón. Her primary mentors were Louis Horst for choreography and Doris Humphrey, José Limón, Betty Jones, Martha Graham, Ethel Winter, Helen McGehee, Antony Tudor, Maggie Black, and Margaret Craske for dance technique. She received an advanced degree from the University of Michigan and while on their faculty, helped move dance from Physical Education into the School of Music, developing the Department of Dance. She was recognized for her accomplishments by receiving their Distinguished Faculty Award. Twenty years later, the Alumni Association of the School of Music at the University of Michigan awarded the Citation of Merit to Bergmann for Lifetime Achievement.

Bergmann was a tenured, full Professor at Florida International University in Miami and held the Christina Halpin Endowed Chair of Dance at Shenandoah University in Winchester, Virginia. During her eight years at Shenandoah University, she helped develop five-degree programs in Dance, choreographed over thirty works while in residence, received five faculty development grants and received the Wilkin’s Appreciation Award. She has served as Chair of Dance at California State University at Long Beach and has been an Artist-In-Residence at the University of California, San Diego and the University of Hawaii. Having received three Choreography Fellowship Grants from the National Endowment for the Arts, a three-year grant from the California Arts Council, and a Virginia Commission for the Arts Choreography Grant, her work has been shown both nationally and internationally. Her choreography for Gian Carlo Menotti’s “The Unicorn, the Gorgon, and the Manticore” was invited to be performed at the Spoleto Festival by Menotti. Her choreography was selected by adjudication, for the 5th Annual Dance Kaleidoscope Concerts, John Anson Ford Theatre, Los Angeles, CA, for the American College Dance Festival Association’s (ACDFA) Gala Concerts at Western Michigan University and at the University of Illinois, for the Florida Dance Festival at the Colony Theatre in Miami Beach, FL as well as selected by adjudication for the Reston Institute for the Arts, Sixth Annual New Choreographer’s Showcase, Reston, VA. She spent three years as a guest choreographer at the Interlochen Arts Center in Interlochen, Michigan and was a Fulbright Scholar to Trinidad, West Indies where she choreographed and taught for the Trinidad Theatre Workshop.

She was nominated for two years by Shenandoah University for a Virginia State Council of Higher Education Outstanding Faculty Award, received the First Annual "Bergie Award" from the San Diego Institute for Arts Education, received the Michigan Dance Association’s Plaudit Award as well as the International Women’s Year Achievement Award. Bergmann also has the distinguished honor of representing dance as a member of the National Teacher Training Institute for the College Board, Educational Testing Service (ETS).

While in San Diego, she founded and was Executive Director for the San Diego Institute for Arts Education, modeled after the Lincoln Center Institute in New York City. She has self-published four volumes of her poetry and was a guest teacher and choreographer for DanzFest in Cattolica, Italy and for the Carreño Dance Festival. Bergmann has been studying and teaching the work of Martha Graham and José Limón for over 50 years.